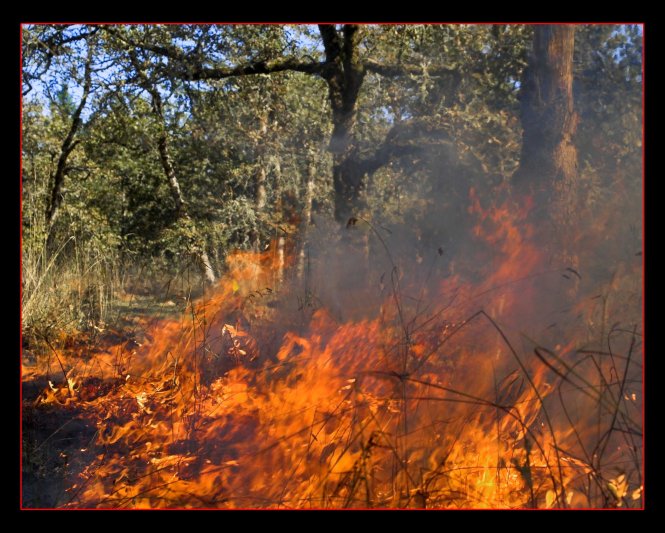 Controlled fires set in the Cowichan Garry Oak Preserve on Vancouver Island as part of a study that suggests many landscape may be vulnerable to ecosystem collapse.
PHOTO: TIM ENNIS, NATURE CONSERVANCY OF CANADA

02.06.2013
VANCOUVER _ Ecologists have long suggested that ecosystems disturbed and managed by humans are prone to abrupt environmental collapse.

To test the theory Andrew MacDougall and his colleagues took their torches to small plots of grasslands on Vancouver Island.

And sure enough, the fire was enough to doom seemingly productive and healthy pastureland.

Within one growing season invasive woody plants took over, which is a remarkably quick and abrupt change, says MacDougall, at the University of Guelph, who led the 10-year  study.

The results, splashed across the cover a leading international science journal this week, point to what MacDougall and his colleagues describe as a potential “vulnerability to collapse” in many of the world’s ecosystems that have been disturbed by humans.

“What we see on Vancouver Island is no different than what I would see in grasslands in Australia, or Argentina or Eurasia, “ MacDougall said in an interview. “That same thing is happening everywhere.”

He and his colleagues say the findings, published in the journal Nature on Thursday, suggest farmers and resource managers would be wise to embrace biodiversity and native species as a hedge against fire, drought, and the planet’s changing climate.

The study was done on 80 small plots on a 10-hectare site on southeast Vancouver Island owned by the Nature Conservancy of Canada.

Much of  land at the site  is typical of the “degraded” grasslands along the Pacific Northwest Coast that are dominated by “exotic” grasses introduced in the 1800s and helped along by 150 years of fire prevention and suppression.

“It is a mess all the way down to California,” says McDougall, noting how dozens of plant and animal species native to the ecosystem are now lost or listed as species at risk.

In the summer the researchers used roofing torches to ignite controlled fires on 80 experimental plots, some composed of introduced grasses, others rich in native species. The fires burned the plots in less than a minute and were then quickly doused.

The impact of the fire on plots made up of introduced grasses was dramatic. The plots were taken over by invasive woody plants within one growing season.

“It was stunningly immediate.” says MacDougall, of the way the grassy ecosystem “collapsed”.

The plots with more plant diversity were much more resilient and the fire did little harm. It even stimulated some native plants, such as camas lilies, to undergo remarkable growth and flowering spurts. “It’s like you dumped fertilizer on them,” says MacDougall.

Diversity also affected the fire itself. The more diverse areas had less ground litter, making high-intensity fires less likely to recur. The single-species grasslands created more litter to fuel the fires, which were lit each year on some of the plots.

MacDougall says the stability of natural grassland ecosystems is rooted in the way different species thrive under different conditions and can buffer the impacts of phenomena like fire and drought.

Farming tends to homogenize landscapes by favoring huge expanses of crops that are not natural to the landscape. While such monoculture results in big yields and profits – and feeds and increasingly hungry world –  the researchers say it also removes the buffering effects of native species that can be “crucial for ecosystem stability.”

“You can make a lot of money with monoculture, but it’s a bit of devil’s bargain,” says MacDougall, who suspects many of the world’s managed ecosystems are vulnerable to sudden environmental change.

He likens the benefits of biodiversity to investing in a diversified stock portfolio. With more species on the landscape the risk of ecosystem collapse decreases, which he says could become increasingly important  as the climate changes.